5  out of 5
Our Overall Service

KC was up front on a lot of stuff that was never even a mention from other companies. The installation crew ended up having to clear out a lot of brush brush, and never have a bad word about it even though it was supposed to be gone before they started. Crew was pleasant and engaging. On top of that, they were fast. They came out on the hottest day of the year, and had to clear tons of brush. Even though they promised a 1 day installation, I was prepared for a 2 or 3 day considering the temperature. After a day and some hours the job was done, and I have a beautiful fence.

MC Fence and Deck was the last company that I attempted to get a hold of because I had only learned about them a short time before from a neighbor. MC was the first company to call me back and schedule an appointment. On top of that, the call representative was very nice. It was the kind of friendly chit chat that almost makes you think you're talking to a friend back at home, but still taking care of business at the same time.

Got to work with KC. KC was up front on how certain styles and and where they were in relation to the other yards and fences would raise or lower the costs. KC was also able to explain things to my wife that put her at ease with the process, which is very important to me in these matters.

The crew had to deal with brush, old chain link fence, and the neighbor's wooden fence falling over on top of them, and never a bad word from them at all. They were always polite, appreciative of waters and ice I brought to them, and got the job almost completely done in spite of triple digit heat indexes, a lot of stuff to clear, and a fairly large yard.

Only I, the wife, and the crew know that they were there.

What made you choose our company:

First off, MC was the first to reply and schedule up an appointment, and that holds a lot of water for me. Secondly, KC, showed up for the estimate, actually looking like he was ready to install a fence, specifically the truck and tools. I felt that MC had sent someone that would have invested on some level, the work that I was looking to have done, and didn't just send a number cruncher out to take measurements and spit out a price. I don't necessarily have a problem with number crunchers, but if all you do is run around and take measurements and spit out prices, there isn't investment in pride I think. Also, you don't get the up front conversation that came with the estimate from KC. My wife and I wanted two different style of fences. Without knowing who wanted what, KC was able to explain in very simple reasoning the difference in pricing and difficulty for the two styles of fence as it pertain to our yard. Even though KC provided the estimates for both styles, we were able to come to a consensus at the time of the installation. We also feel that we got very reasonable pricing for the installation.

Alexandria, VA 22310
Fairfax County
Back to Previous Page
Back to Reviews 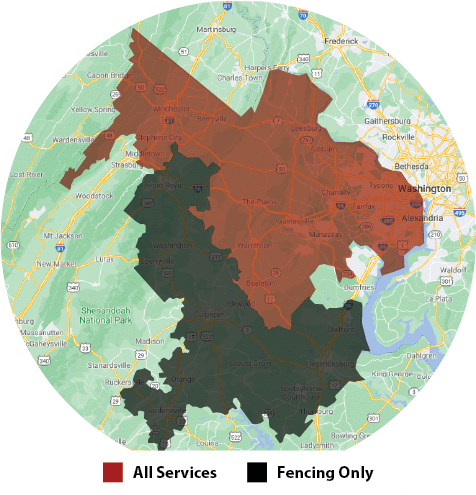